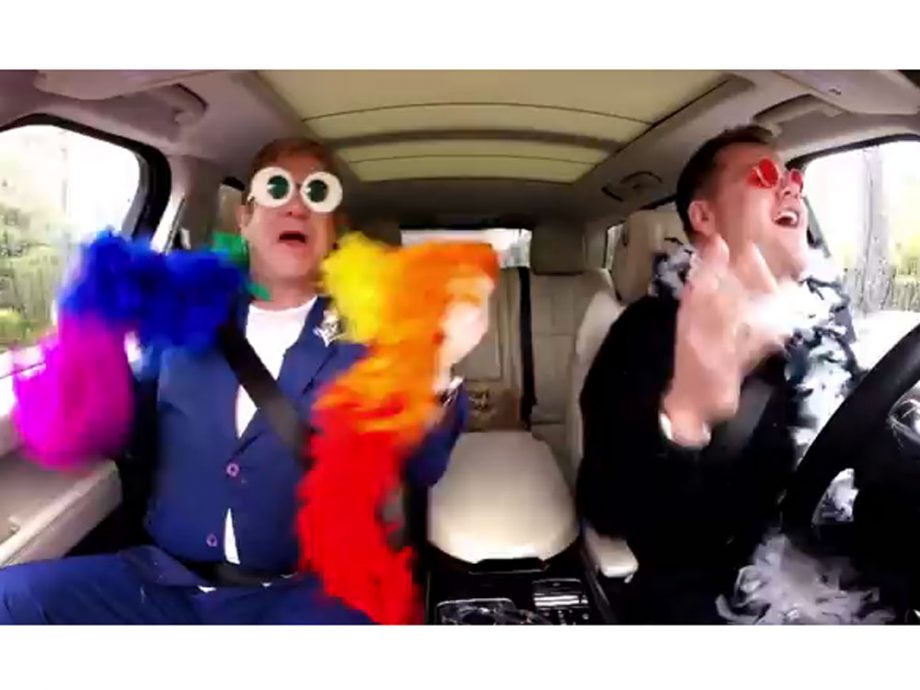 Remember just a few weeks ago when James Corden and Adele’s Carpool Karaoke went viral?! Well, he’s done it again, and this time he’s pulled out the big guns.

Yep, Elton John is the latest celebrity to take a ride in James Corden’s car for a spot of Carpool Karaoke – a regular feature on the Late Late Show.

In the special Super Bowl edition the pair take a drive around rainy LA whilst belting out a number of Elton’s legendary tunes. The duo sing their hearts out to hits including Your Song, Crocodile Rock and I’m Still Standing while Corden quizzes the icon about his life and career.

Elton – wearing a trademark jazzy blue suit and matching mirrored sunnies – tells Corden he has never worried about what people might have thought about his outfit choices. Speaking about his penchant for a flamboyant get-up he said: “I was at the piano and never a sex symbol … I just went for it.”

As the hilarious pair car-dance along to Elton’s hit collection Corden asks him about dancing to which he responds that Arlene Phillips once told him he was “the worst dancer she’d ever worked with.” Awks.

As the pair put on feather boas and comedy sunglasses (LOLs) Elton reveals he still does not own a mobile phone (say what?!), as well as talking briefly about his upcoming new album, Wonderful Crazy Night and how his two children have completely changed his life.

The biggest highlight of all though is the moment when the Circle of Life comes through the stereo and the stars take it turn to wear a Lion King headdress. Yep, Elton included. Just when we thought it couldn’t get much funnier, the video ends with Elton thanking Corden with the words “Mr. George Michael, Mr. James Corden, My future husband”. What a joker.

Check out the skit below. We challenge you not to sing along…