How do you pronounce scone? Does it rhyme with ‘con’ or ‘cone’? More importantly, how do you feel about people that pronounce it the way you don’t? Do they really deserve to be given a proper British execution: pushed off Land’s End? And finally, do you put the clotted cream on before the jam?

These questions and more will be answered. We’re determined to solve the Great British scone dilemma once and for all! (But probably won’t, the country is already too divided).

In an attempt to build a bridge between the scone-eaters, YouGov issued a nationwide poll to try to find the more favourable pronunciation. Democracy is democracy as the Brexiteers like to say.

As you can, the further north you go, the more the ‘bone’ pronunciation recedes (except the midlands which a large majority – weird).

However, history as proven time and time again that people don’t want to change their pronunciations. There is no correct way to say any word; language is fluid that way.

As Mashable report, the United Kingdom subreddit took this information in jest and came together to fill the bone/gone void with laughter.

One redditor pointed out a very interesting flaw in the YouGov results. Something we’re kicking ourselves for not noticing while looking at the results.

The further detail pointed to a 3% ‘other’ category as well…

So that’s almost agreed on: scone like gone is the correct way of pronouncing it.

Now the less discussed issue of the spreading. When spreading your clotted cream and jam, which one goes on first? Jam first is known as the ‘Cornish Method’ and is practiced by the vast majority of people. 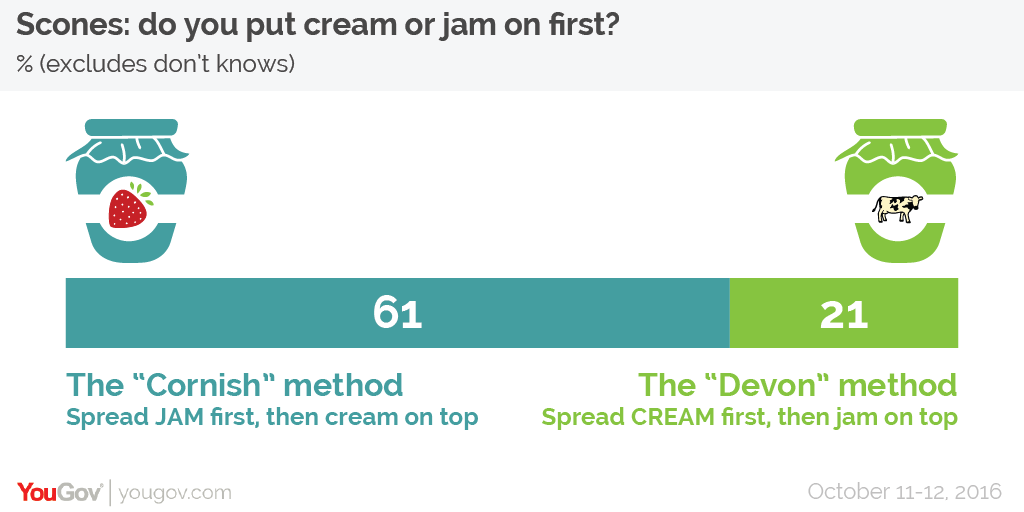 What are your preferences? Have you been eating scones wrong your entire life? Let us know!