Fire, the wheel, the steam engine, the telephone, the computer, the internet. All of these singular objects will go down in the hallowed annals of history as one of humanity’s greatest achievements. As computing power dictates our next great leap into the space/trans-human age, we forget that there are equally as groundbreaking innovations happening in our very kitchens. Namely, this woman that figured out how to turn her fridge into a wine dispenser.

Considered a hero of the world by all, Clare Potts, 28 years old, broke outside of the box to reinvent an under-utilised portion of the modern day fridge.

You can get the gist from the picture above but here’s the Tweet just in case which Clare has accurately caption, “My adult life just peaked”.

Speaking to Mashable, Clare Potts described her lightbulb moment and, as geniuses tend to, totally undersold her ability to revolutionise the way we operate a kitchen.

“We’ve just bought a house and we’re in the process of buying all the grown up things we need”.

“My boyfriend Joe was telling me [the fridge] came with a wine rack and I just said ‘why don’t we just put it in the water cooler?’ It seemed like the obvious thing to do”.

The kitchen hack is simple enough, you just pour wine into the dispenser water tank on the side of your door. We suppose it beats drinking straight from the bottle. 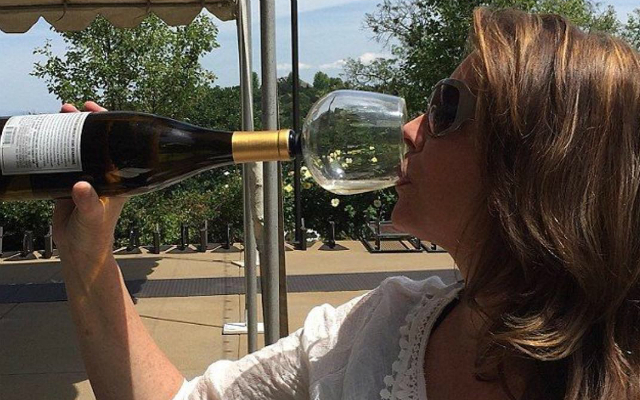 The fridge wine dispenser, like every new innovation, has some design flaws but nothing serious when you think about how much space you’re saving in your house since you don’t need to keep wine in bottles anymore.

However, “It needs to be washed out after though so it doesn’t get clogged,” Clare advised, “Oxidised wine is not nice, so drink fast!”

It probably won’t ever be the primary method of wine storage but this trick will be great at your Christmas party!