We’ve all had enough of Donald Trump and things are only going to get worse from here. We thought that when Hillary stormed the vote there would be a few months of blowback from the sentient hate satsuma and then it’d be over. But that’s not what happened. Trump won the election and we’ve got four years of looking at his bloated face while fearing for our vulnerable friends’ livelihoods.

We need to take action against this caustic glob in a red tie but it’s the holidays and we just can’t deal with it right now. Luckily someone has designed an internet app that replaces every picture of Trump with a picture of a kitten. 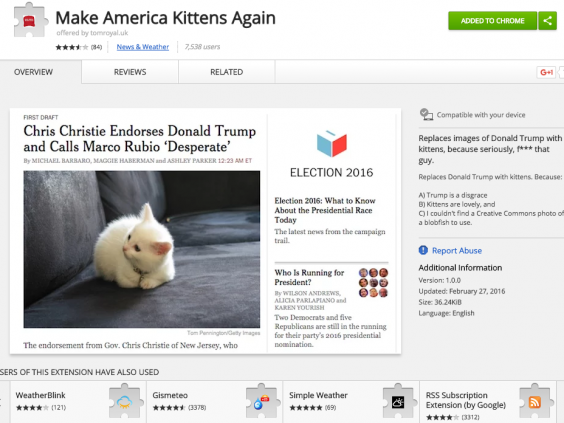 You need to be using Google Chrome for this to work but what this extension effectively does is remove any visual trace of the President-Elect from your favourite news sites. The extension sadly doesn’t work on Facebook or Twitter for now.

As The Independent point out, there are only a set number of photos in the add-on’s portfolio but we’d rather see the same kitten for the rest of our lives than one more picture of the Orange One.

Once you’ve added the extension to your Chrome browser, any photo of Trump will immediately change to kittens.

Here’s a picture of what The New York Times’ politics page looks like with the extension active. 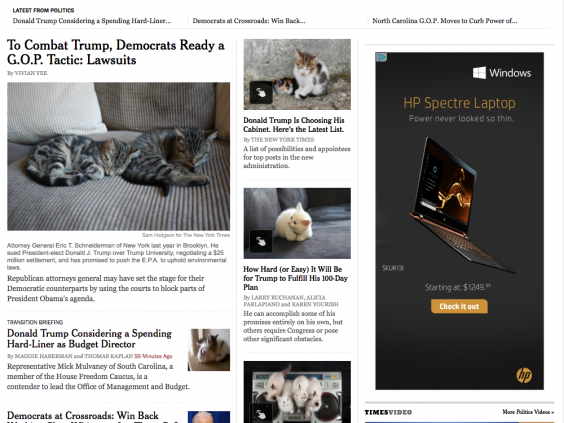 This isn’t the only Trump related blocker you can get for your Chrome browser. It’s by far the cutest but combined with some others, you can essentially wipe any trace of the man from your browsing.

Yeah, yeah, we know all about ‘echo chambers’ but give us a break; it’s Christmas.

Our personal favourite Trump filter is this one which replaced the word ‘Donald Trump’ with ‘Someone With Tiny Hands’.

We’re not for exploiting people’s insecurities but we’re even less for putting the fear of exportation or worse into our minority, LGBT and immigrant friends.