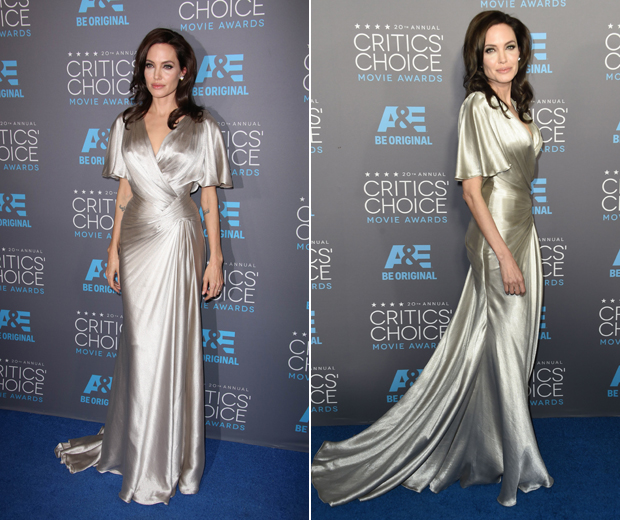 With awards season in full swing, Hollywood is buzzing with talk of winners, losers, dresses and ‘dos, and last night’s Critics Choice Awards was no exception. But perhaps the biggest talking point of the evening was Angelina’s incredible red carpet transformation. There was not a black dress in sight, as Ange had instead opted for a shimmering silver Versace gown with short sleeves, which was ruched to one side creating a killer silhouette.

It’s no surprise that the Unbroken director chose Versace for the event. Remember last year’s leg-gate at The Oscars? That dark, velvet gown was also a Versace number, as was the actress’ wedding dress, which was personally made by Atelier Versace maestro Luigi Massi. For last night, Ange kept her hair in loose curls, keeping accessories to a minimum. We’re getting some serious retro vibes. In fact, we have a feeling that Versace’s old-Hollywood dresses may be a breakout trend of awards season, given that Jessica Chastain donned a metallic halterneck for the Golden Globes on Sunday.

Now that the Oscar nominations have been revealed, we can’t wait to see the red carpet frocks. In particular, we can’t wait to see whether Angelina opts for Versace, or mixes things up with (gasp!) a completely different designer. Will the leg be making an appearance? Will Brad be there? Will he have an awkward ex-chat with Jennifer Aniston? These are all valid and pressing questions!

In the meantime we might distract ourselves with the trailer for Unbroken, which you can watch below. Sadly it hasn’t been nominated for anything, but that doesn’t stop us being super excited for next-big-thing Jack O’Connell, who can also be seen in the latest Prada campaign. Maybe Ange gave him fashion tips?