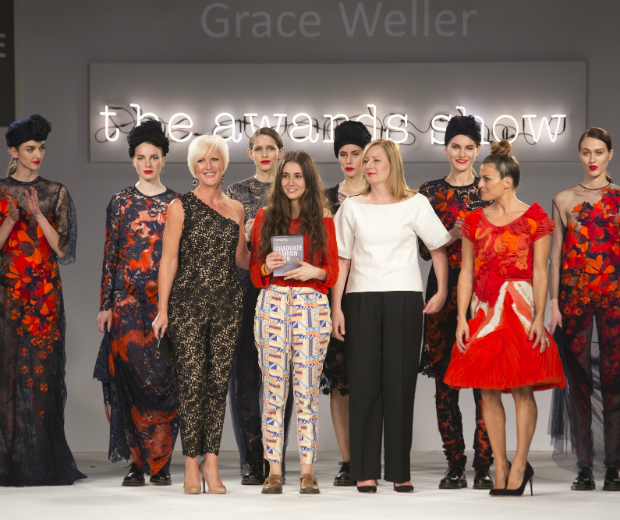 Graduate Fashion Week’s winners were announced last night in a promising haze of sequins, silk and chiffon, as the final 25 young designers showcased their collections in London.

Luckily, we were FROW-side, along with the likes of Amber Le Bon, Diana Vickers, Lilah Parsons and Sam Faiers, and we were bowled over by the overwhelming talent on show. There were some seriously impressive creations from fashion students across the country, with both menswear and womenswear strutting down the catwalk. Zoe Hardman was our presenter for the evening, rocking an incredible red wool dress created by a student of the University of West London, and everyone from fashion journalist and industry superstar Hilary Alexander to George’s Vice President Fiona Lambert presented the excited winners with their awards.

There was everything from fruit-inspired collections to innovative knitwear, a healthy dose of coloured faux fur and even a few looks based on Disney’s fiercest villains. The big winner of the night, however, was Grace Weller of Bath Spa University, who scooped not one but two awards: the Womenswear accolade and the George Gold Award. Grace follows in the huge fashion footsteps of Stella McCartney, Julien Macdonald and Christopher Bailey, all of whom are previous winners of the prestigious £10,000 prize, which also enables the recipient to design their very own range for George. Phillip Treacy was on hand to present Grace with her title, and said: “What an amazing experience this has been. It’s fantastic that this country has so many schools that recognize such incredible talent.”

Grace’s graduate collection was definitely one of our favourites – her ethereal, intricate lace gowns with delicately embroidered flowers really blew us, and the judges, away. Fiona Lambert said the final decision was unanimous, and we could see why. We were so taken with her romantic colour palette of navy and red that it’s the only combo we want to wear from now on.

Other winners included Aimee Dunn of Nottingham Trent University, who was named best Menswear designer, fellow Nottingham Trent student Rebecca Swann took the Knitwear title and Camilla Grimes of Manchester School of Art won the Creative Catwalk Award for her playful pink fur. A huge congrats to all the graduates involved – here at LOOK we’re excited to see what this promising bunch of future fashion stars do next. One thing’s for sure: we left Graduate Fashion Week feeling suitably inspired.


Got a tablet? Download LOOK magazine straight on your iPhone, iPad, Kindle (just search the store for ‘LOOK magazine’), Nook or Zinio. And don’t forget to rate and review! Or

to get LOOK delivered every week