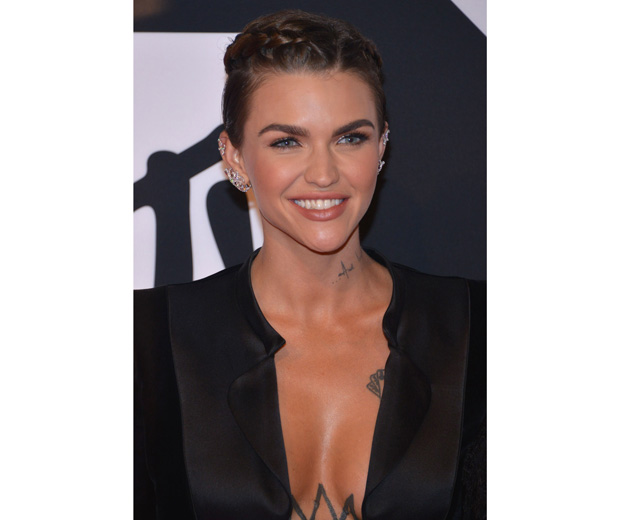 Since her debut in Orange Is The New Black Ruby Rose has been all over social media – and for good reason, the stunning 29-year-old has been breaking the hearts of both boys and girls, it seems, with her androgynous beauty and refreshingly outspoken attitude. Last night Rose hosted the EMAs with co-host Ed Sheeran and sent Twitter into a frenzy after welcoming the audience and viewers: “Ladies and gentlemen, and everyone in-between.” The Actress and model is known to be outspoken when it comes to the topic of gender fluidity, an advocate of the term, she has previously stated that she identifies herself as neither male nor female and created a short video in 2014 called Break Free, depicting her struggles with how she identifies herself in terms of her gender. The 29-year-old wore a selection of show stopping outfits, including a black floor length gown embellished with red sequins that spelled out her name, a plunging velvet Armani suit and a slightly strange yellow mini dress that resembled a bowl of spaghetti. Of course, she managed to pull off the look and even joined in with the jokes, Instagraming a photo of herself in the dress and captioning the hilarious snap: ‘Happy pasta day!!’ She poked fun of herself in this hilarious Instagram It seems as though all of Ruby’s makeup look was created using Urban Decay, as her MUA’s posted a pic of all her products used onto her Instagram. She wore her short hair in two cute braids, created by her hair stylist, Castillo. Before hitting our screens Ruby worked as a model and was also a host for MTV, a DJ and a recording artist. But what I bet you didn’t know, is that the actress is also the ambassador and face of Maybeline in Australia, and has been for quite some time. She’s so passionate about the brand she’s even got their trademark phrase tattooed above her collarbone: maybe she’s born with it. She wore her hair in a dutch braid to the event

In an interview with Beauticate, Ruby shared some of her beauty secrets and the good news is they are all seriously cheap! The star revealed she owes her amazing skin to ‘lots of sleep’, Garnier Micellar Cleansing Water and Cetaphil.

‘I don’t really have any bad beauty habits now, I take all my makeup off I drink water all the time and I eat food that’s good for my skin, “ said Ruby.

‘I wash my face three times a day, if I can. That’s my one important thing. I’ll do hair and makeup and then if I’ve got a break between the next fashion show I’ll wash it all off, do a quick mask and then put makeup on again, just to let my skin breath,’ she said. ‘Garnier Micellar Cleansing Water gets rid of all the makeup. I moisturize with a light Cetaphil, which is like the cheapest, most simple product in the world, you can get it everywhere. I love Cetaphil.’

If you haven’t ever heard of Cetaphil, it’s a skincare brand specifically formulated for dry and sensitive skin and their Gentle Skin Cleanser, £8.99, is a long-time cult beauty product loved by beauty insiders and celebrities. Ruby at the Orange Is The New Black Screening

No surprise, Ruby’s killer brows are also a hot topic, but hilariously, the beauty revealed that her amazing arches are a bit of a fluke. ‘I actually shouldn’t have good brows because when I was young I shaved in all these lines, I had three lines on one side and one line on the other side.” But the Melbourne-born beauty revealed she wasn’t always as experimental with makeup as she is today. ‘I didn’t wear makeup until probably 16, I was just a little boy, people would come over to the dinner table and be like: “We’re just trying to work out are you a beautiful girl or a handsome boy?”’

Today, however Ruby has fully embraced her unique look: ‘I love androgynous beauty that’s how I feel comfortable the most!” Ruby, we couldn’t agree more and FYI our entire office has a major girl crush on you… She’s fond of a bath selfie…